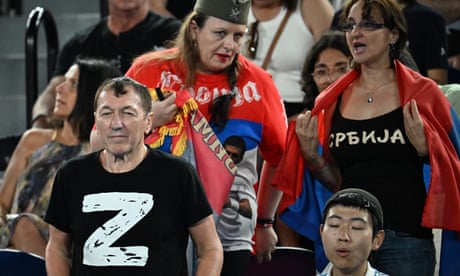 Multiple Australian Open spectators have been questioned by Victoria police after they unveiled flags in support of Russia’s invasion of Ukraine and then threatened security guards following the men’s quarter-final match between Andrey Rublev of Russia and Novak Djokovic.

During the match, which ended with Djokovic comfortably defeating Rublev 6-1, 6-2, 6-4, a spectator removed one of his shirts to reveal a black T-shirt underneath with a “Z” on it. Russian forces have used the letter “Z” as an identifying symbol on their vehicles in Ukraine after the invasion, which Moscow calls a “special military operation”. Supporters of the invasion have also used the sign. Although security were pictured speaking to the spectator, he appeared to remain in his seat until the conclusion of the match.