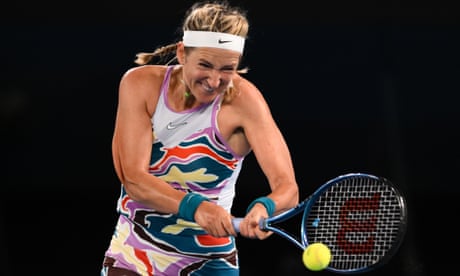 “Do you know what happened 10 years ago?” says Victoria Azarenka. It is hard to read her emotions because of the sunglasses she wears at her press conference, but her voice is laced with long-held contempt. Assumptions were made about what occurred at Melbourne Park in 2013 when the 23-year-old Azarenka, having just squandered five match points in her semi-final against Sloane Stephens, took a lengthy, controversial medical timeout before winning the match and then defending her 2012 title.

But a decade on, in the context of her references to anxiety and panic attacks fuelled by – among other things – an intense fear of failure, there is a sense the reality may be more nuanced. That Azarenka was, as she put it, painted as the “villain” in the Hollywood narrative that accompanies so many sports. “But we’re not villains, we’re not heroes – we are regular human beings that go through so many, many things,” she says, adding that she sympathises with Novak Djokovic over external doubts about his hamstring injury.