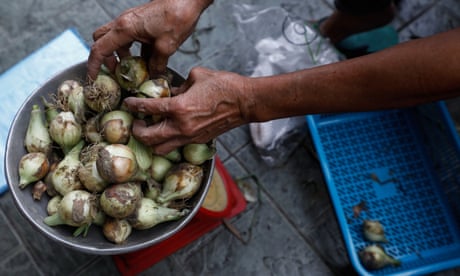 Their price soared so rapidly, some likened them to gold. Restaurants stripped them from their menus, officials warned travellers not to import them without special permission and millions of pesos’ worth have reportedly been seized in raids.

Between 500m and 600m pesos ($9m – $11m) worth of onions were impounded by officials last year, according to local media. The vegetable accounted for 30% of smuggled farm products.

Bags have been found in warehouse raids, and hidden among shipments of clothing. Last month, authorities uncovered 17m pesos’ worth of yellow onions inside containers labelled as holding blouses, slippers, and various household items. A few days before that, 20m pesos’ worth of onions, weighing 50,000kg, were found hidden among pastries and bread products.