European roundup: Dortmund edge past Mainz while Barça march on in cup 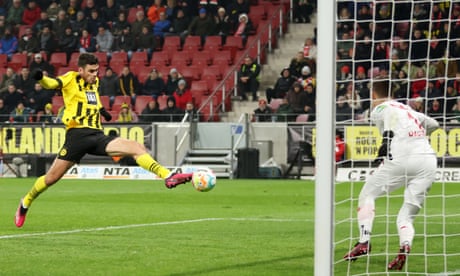 Gio Reyna again came off the bench to score a late winner for Borussia Dortmund, securing a 2-1 victory at Mainz in the Bundesliga.

Reyna also scored Dortmund’s late winner in a 4-3 win against Augsburg on Sunday, and repeated the feat on Wednesday after coming on with just under half an hour remaining.

Fellow substitute Sébastien Haller headed on a free-kick for Reyna to sweep home in the third minute of injury time. The American ran toward the corner flag pointing to the sky with his right index finger. After celebrating with teammates, he faced fans with his fists to his ears, as if showing he’s blocking out the fallout from his family’s dispute with the former US coach Gregg Berhalter that has led to turmoil at the US Soccer Federation.

Reyna’s goal, his fourth of the season, keeps Dortmund’s winning start to 2023 intact and moves the team five points behind league leader Bayern Munich, who have drawn twice since returning from the winter break.

“We’re happy to come out of the starting blocks like that into the new year,” Dortmund coach, Edin Terzic, said. “We know we have a lot of work in front of us.”

It wasn’t pretty or convincing, and Dortmund had to rely on luck at times. “We have to believe we can win a game in the 90th minute,” said Julian Brandt, who delivered the free-kick before the goal. ”It’s something to build on, that at some point we’ll play the beautiful football that’s dormant within us.”

Emre Can started in place of the suspended Jude Bellingham, while Niklas Süle came in for Mats Hummels, who dropped to the bench. Julian Ryerson started at right-back again for the second game since his transfer from Union Berlin.

Lee Jae-sung got Mainz off to a great start in the second minute with a header from a corner. Ryerson had allowed the South Korea midfielder too much space, but he atoned two minutes later with the equaliser after seeing his shot from distance take a deflection.

Dortmund had a couple of good chances early on but that was it as each team cancelled out the other in midfield. Terzic reacted in the 62nd minute by bringing on three forwards – Haller, Reyna and Jamie Bynoe-Gittens – at once. Haller was making his second appearance after treatment for testicular cancer.

“People always talk about his tumour and not the fact he makes us better,” Brandt said of the Ivory Coast striker’s first assist for Dortmund.