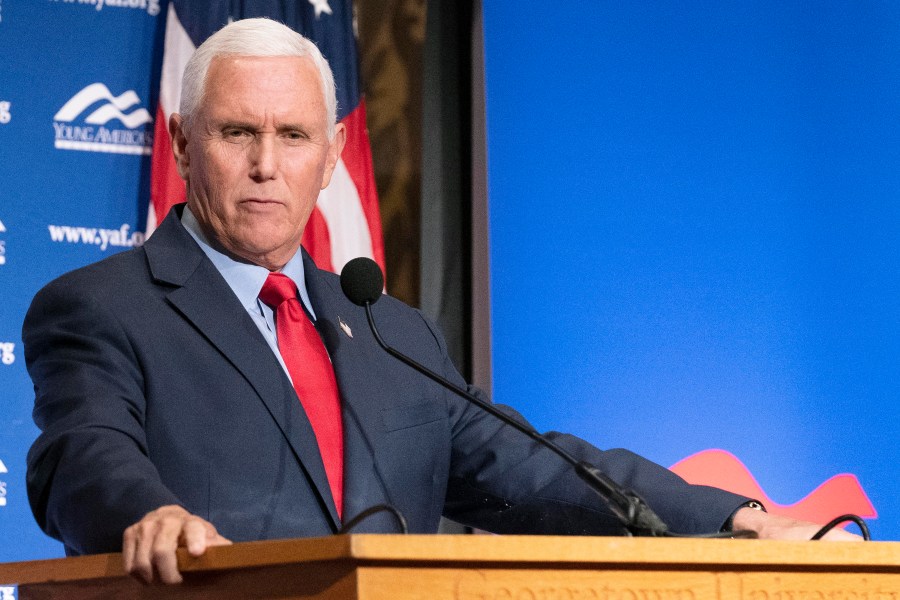 --> A midday take on what's happening in politics and how to have a sense of humor about it.*

TALK OF THE MORNING

What a time to be a special counsel:

On Tuesday, former Vice President Mike Pence was added to the list of presidents and vice presidents who had classified materials found in their personal residences.

Politically: This complicates Republicans’ attacks on President Biden. “The revelation came just as Republicans in Congress were digging in on Biden, painting the president as careless and possibly jeopardizing sensitive information.”

What separates Biden and Pence’s cases from Trump’s: Biden and Pence’s lawyers each quickly contacted the Department of Justice and National Archives. Former President Trump’s team failed to voluntarily turn over classified government documents, which resulted in an FBI search last summer to recover the materials.

How the Pence documents complicate the GOP’s attack lines on Biden, via The Hill’s Brett Samuels

HOW TRUMP REACTED TO THE PENCE NEWS:

“Mike Pence is an innocent man. He never did anything knowingly dishonest in his life. Leave him alone!!!” Trump posted on his Truth Social platform.

NEW SURVEY — MOST AMERICANS SUPPORT A SPECIAL COUNSEL IN THE BIDEN CASE:

From The Hill’s Al Weaver

‘CLASSIFIED DOCUMENTS GET MISPLACED ALL THE TIME. A FORMER NATIONAL ARCHIVES OFFICIAL EXPLAINS WHY’:

From Time’s Olivia B. Waxman

It’s Wednesday, the 287th day of January. I’m Cate Martel with a quick recap of the morning and what’s coming up. Did someone forward this newsletter to you? Sign up here.

House — *Cranks up the thermostat to 80 degrees.*

Senate — *The annoyed parent who pays the heating bill and turns it back down*:

But Senate Republicans are not entertaining the idea, even before they knew about former Vice President Mike Pence’s documents, as well.

For example — Senate Republican Whip John Thune (S.D.) told The Hill: “I don’t think you want to get into where it’s a tit for tat, every two years or four years you’re dealing with impeachment proceedings in the House and Senate. There has to be a really good reason, obviously, the constitutional reasons and grounds for that. So we’ll see where it goes.”

How Senate Republicans are handling the balance, via The Hill’s Alexander Bolton

“Some senators are eyeing a divided Congress as an opportunity to tackle reforms to Social Security, as the program faces significant solvency issues in little more than a decade.”

It's a tricky one: “Changes to Social Security are a perpetually heavy lift for Congress, but they’ve gained traction as some House Republicans float cuts to it as part of debt ceiling negotiations.”

But there has been some rumbling: “Senate Republicans are generally leaving debt ceiling negotiations to the GOP-controlled House. But separately, there has been growing chatter from both parties in the upper chamber about potential ways to help protect Social Security, which some estimates say is on track to becoming insolvent in about 12 years.”

How this could play out, via The Hill’s Aris Folley

“ ‘I FELT LIKE WE WERE IN “GOODFELLAS”: HOW GEORGE SANTOS WOOED INVESTORS FOR ALLEGED PONZI SCHEME’ ”:

“Accounts gathered by The Post provide fresh insight into how [Rep. George] Santos [R-N.Y.] pitched Harbor City to investors, including a real estate agent who says he lost $50,000.”

I can see the bumper stickers now — ‘Put Don and Marj in charge’:

From former Trump aide Steve Bannon: "This is no shrinking violet, she's ambitious — she's not shy about that, nor should she be … She sees herself on the short list for Trump's VP. Paraphrasing Cokie Roberts, when MTG looks in the mirror she sees a potential president smiling back.”

A second source told NBC: Greene’s "whole vision is to be vice president." The full report

We knew this was coming, but McCarthy officially blocked Schiff and Swalwell:

“Speaker Kevin McCarthy (R-Calif.) on Tuesday formally rejected two Democrats — Reps. Adam Schiff(Calif.) and Eric Swalwell (Calif.) — from serving on the House Intelligence Committee, escalating the two-year tit-for-tat battle between the parties over who is qualified for certain positions on Capitol Hill.” Back story if you haven’t been following this saga

Watch McCarthy’s response when asked about Schiff and Swalwell: Video from C-SPAN

From The Hill’s Mike Lillis and Mychael Schnell

Why this case is different: “While McCarthy has the power to unilaterally block Schiff and Swalwell from the Intelligence Committee, unseating Omar would take a vote of the full House, where Republicans hold only a narrow majority.” The full story

🗓️ In other news

Tidbit — imagine a world with a four-day workweek:

WTOP’s Luke Lukert reports that a bill in Maryland would incentivize employers to shift to a four-day workweek for private and public workers.

The incentive: A tax credit

This skit basically wrote itself:

Senators and staffers had some fun writing these:

@mosheh posted a video on Instagram of the Taylor Swift lyrics that senators used during yesterday’s hearing about the ticket debacle for her upcoming tour. Watch

The House and Senate are in. President Biden is in Washington, D.C. Vice President Harris is heading to California this afternoon.

An Oreo-flavored Oreo — let me ponder this for a sec:

The new cookie’s name: The "Most Oreo Oreo"

And to leave you feeling impressed, watch this hippo eat an entire pumpkin in one bite.