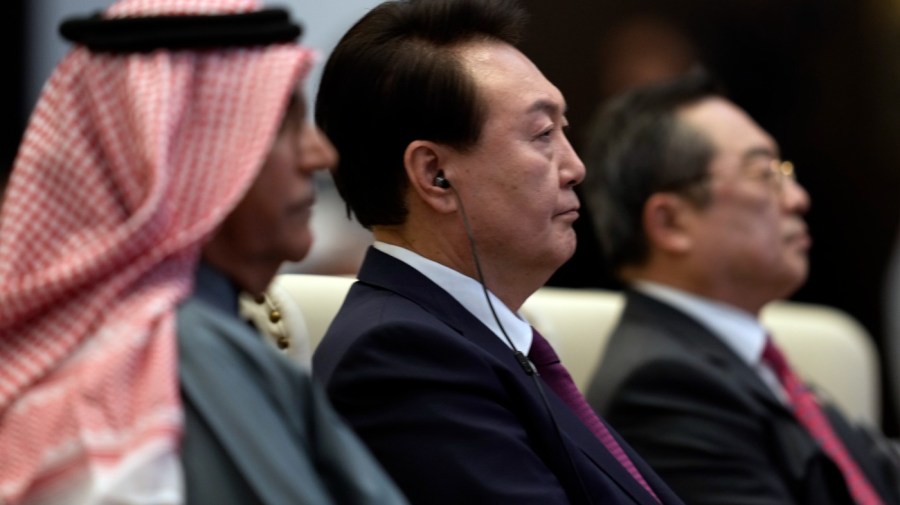 South Korean President Yoon Suk-yeol, on a sales mission to the pivotal United Arab Emirates (UAE), enlarged on his country’s success as a major exporter of arms worldwide. He proudly watched over the signing of agreements with the UAE that should amass $6.1 billion for South Korean industry. The UAE has already agreed to invest $3.5 billion for a Korean missile system for defense against Houthi forces in control of north Yemen and plans to invest another $30 billion in South Korea’s economy.

The size and sophistication of South Korea’s arms industry means the South can defy the North’s mounting threats. The South need not rely on its American ally for any but the most high-tech weapons. All the South does not possess is a nuclear program. Yoon has said he would like to consider the South’s emergence as a nuclear power, but the Pentagon insists the U.S. will always provide a “nuclear umbrella” lest Kim Jong Un were so foolish as to press the button on a missile carrying a nuclear warhead southward.

As doubts arise, however, about whether the U.S. would rush to South Korea’s rescue in a nuclear war, pressure intensifies for the South to “go nuclear.” Who can be sure the Americans would live up to their treaty obligations? And should South Korea go on as a military dependency of the United States when it’s already a massive arms producer, capable of meeting most of its military needs?

In the web of alliances and “commitments,” one great question is, what is China doing or likely to do? China now has so many internal issues and problems, including the spread of COVID-19, that President Xi Jinping is in no position to invade the independent island province of Taiwan as he has threatened. The Chinese, however, are fabricating ever more warheads and China’s missiles can deliver nukes to targets anywhere in the region.

In North Korea, Kim also has been talking about firing tactical nukes. He can do nothing, however, without Xi’s endorsement. It’s hard to believe that Xi would go along with Kim’s dream of attacking America’s northeast Asian allies — South Korea and/or Japan — when China does a roaring business with both of them, as well as the U.S. As far as the Chinese are concerned, Kim can order missile tests and maybe another nuclear test, but that’s about it.

Yoon must always watch out for Japan as much as China. It may seem heartening to Americans that Japan’s Prime Minister Fumio Kishida has initiated a new “strategy for defense” against Japan’s enemies, near and far. The cognoscenti in the White House, Pentagon and State Department are delighted that Japan at last is committed to picking up its share of the load, planning to increase defense spending from 1 percent to 2 percent of the country’s gross domestic product, which topped $5.4 trillion for 2022. In five years, Japan’s military budget could double its current level of about $47.2 billion.

Koreans, however, may not be so thrilled to see Japan rising again militarily. Memories of Japanese colonial rule over Korea burn deep in the Korean psyche. South Korea may find common cause with Japan against North Korea, but we can be sure that many South Koreans will look with misgivings on an immense Japanese military build-up. Their thinking is, who can trust the Japanese, years from now, while fighting off the North Koreans, to stay away from South Korea?

Against this background, South Korea’s deal with the UAE shows the South’s rising strength as a military power. Yoon predicts the South’s arms exports, now seventh in the world, will rank fourth in four years. South Korean arms sales shot up to about $18 billion last year, thanks to a deal with Poland for the sale of planes, tanks and artillery pieces.

Just as Russia’s war against Ukraine fueled Polish fears of a Russian invasion, so too the belligerence of Iran, across the Persian Gulf, led the UAE to look for South Korean weapons to buttress its strategic position in the maelstrom of Middle East rivalries. The concern is not just Iran but also Iran’s support of the Houthis in North Yemen and subversive groups everywhere.

It’s not just the UAE’s geographic position, however, that gives it such importance in the region. The UAE ranks as the world’s seventh largest oil producer, after six much larger countries — America, Russia, Saudi Arabia, Canada, Iraq and China — and is the source of 10 percent of South Korea’s oil imports. In a crisis, South Korea could rise to the UAE’s defense and the UAE could increase its oil shipments to South Korea.

By far the most significant visible element in the UAE-South Korean relationship is a $20 billion nuclear power complex that South Korean companies are building under the aegis of the Korea Electric Power Corporation. When completed, it will provide the UAE with one-fourth of its electric power. At home, Yoon has said South Korea must build more nuclear power plants and reopen those that his predecessor, Moon Jae-in, shut down. They’re badly needed to fulfill the South’s needs. Appropriately, the Korean-made plant in the UAE is named Barakah, “blessing from God.”

If the Koreans can make nuclear power plants, nuclear warheads should be next for defense against North Korea and China, without whose support the North could not survive. But could Japan and South Korea fight as allies? In response to intimidation by China and Russia in the form of intrusions into Japan’s air defense identification zone and threats from North Korea, the Japanese will be acquiring hundreds of Tomahawk missiles and more warplanes, including drones, from the U.S.

All this puts South Korea in a difficult position. Spurred on by the Americans, the South Korean and Japanese navies have conducted joint exercises and are exchanging intelligence information. As long as Japan refuses concessions on so many other differences springing from the era of Japanese rule over Korea, however, Koreans will look with suspicion — if not alarm — on the prospect of Japan’s renaissance as a major military power.

That’s all the more reason for Yoon to want to consider the nuclear option: If “they” have them, why not “us”? Looking far ahead, it’s not hard to imagine a war in which North and South Korea fire tactical nukes against one another in a battle to the death on both sides.

Donald Kirk has been a journalist for more than 60 years, focusing much of his career on conflict in Asia and the Middle East, including as a correspondent for the Washington Star and Chicago Tribune. He currently is a freelance correspondent covering North and South Korea. He is the author of several books about Asian affairs.