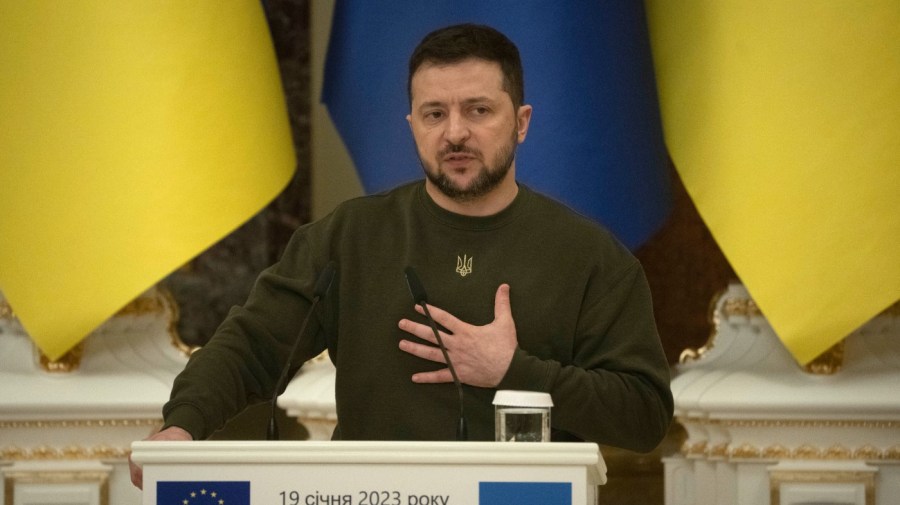 The Ukraine war is in a decisive period, just as NATO Secretary General Jens Stoltenburg said.  What makes the next 10 months decisive is possible “Ukraine fatigue,” the topic that Time magazine reported as the “phrase of the day” in Davos. Right now, such fatigue is less a reality than a product of Russian information warfare. That could change, however, if the Zelensky government cannot achieve major progress between now and fall 2023. To do that, Volodymyr Zelensky needs not only more but faster U.S. and allied concerted support.

Vladimir Putin has never wavered from his primary goal in Ukraine: subjugation. He continues to deny the existence of Ukrainian sovereignty; for him Ukraine is part of Russia. He also maintains the fiction of a Nazi regime that Russia must oust, and he is taking steps to improve his military’s performance for an upcoming offensive. In short, he remains the unrepentant and determined war-criminal aggressor that he has been from the start.

Putin’s idea of negotiations is Ukraine capitulation, Zelensky’s removal, and Russian dominance of what’s left. Putin has lost, in the sense that his aggression has only strengthened NATO and the U.S./European transatlantic ties and weakened Russia economically. But he has not lost in Ukraine itself. He still controls much of the Donbas — important because Russian occupation there robs Ukraine of industrial capacity, thereby increasing, in Putin’s view, reliance on Russia.  Putin also controls Crimea and the coastline between Crimea and Donbas — important because control of this area also diminishes Ukraine’s economic capacity and increases Russian influence. With what he has, Putin can choke off Ukraine economically and influence, if not dominate, Ukraine.

Further, Putin has not in the least diminished his intent to use military might to achieve his ends.  Right now, that force entails the criminal bombardment of Ukraine’s civilian population and infrastructure. He’s doing this in the attempt to break Ukraine’s will and to cover reorganization and improvement within his military. He is unlikely to break Ukraine’s will. And, because of deep structural problems in the Russian military, as well as the unhealthy competition between mercenaries and the Russian military, Putin likely will not be able to achieve the kinds of improvements and success he envisions. But he’s undeterred, believing that time is on his side.  At the very least he will try to hold on to the territory he has now. That, in his mind, may be enough to force negotiations while he is in a position of strength, create a “rump” Ukraine that Moscow can continue to choke, and produce enough of a victory on which he can capitalize.

Therein lies the reason the next 10 months are decisive for Zelensky and his allies.

Zelensky has a complex task. At the very minimum, he must force Russian troops out of the oblasts along the coast between Crimea and Donbas. To do so, he will have to prevent Russian advances and take, or at least threaten significantly, Russia’s occupied Crimea and Donbas. While doing this, Zelensky also must continue to defend Ukraine’s skies, use long-range fires and limited attacks to thwart Russian preparations, build an offensive capacity, and maintain Ukrainian morale. And he must do this before “Ukraine fatigue” really does set in. But this cannot be done without the U.S., NATO, and other allies changing their modus operandi.

No doubt the allies, especially the U.S. — as evidenced in the latest American support package — have given Ukraine a lot, in terms of military, fiscal and humanitarian aid. Equally without doubt, Putin remains steadfast and in a relatively good strategic position within Ukraine itself. In his mind, his aggression and war crimes will have paid off, if at the end of fall, he remains in his current positions. Only force can move him from where he is — physical force from a counteroffensive, diplomatic force from further isolation, economic force from expanded sanctions, and psychological force from Ukraine and allied unity. Negotiating now will achieve none of this. War is about force. It’s a sad reality, but it is reality. As emotionally disturbing as it is to watch the effects of Putin’s debauchery, it will be more disturbing if he succeeds.

The U.S., NATO, and other allies must provide Ukraine with what it needs to accomplish the full set of tasks necessary to eject Russia from all the territory it has seized since February 2022 and at least threaten Putin’s control of occupied Donbas and Crimea. This is the minimum criteria for Ukraine and allied success in this war. Otherwise, Ukraine’s political sovereignty and territorial integrity will mean nothing — and the allied claim to stand against illegal aggression will mean even less. The allies must simply stop the “give them part of what they need, slower than they need it” approach to supplying Ukraine. This approach has gone on too long already. Ukraine needs more air defense systems, tanks, and long-range artillery — and rockets to do what is necessary.

The NATO Secretary General is right. This is a decisive period in the Ukraine War. And only allied actions — not words — will determine whether it was decisive for the Russians or the Ukrainians. Shipping notifications don’t count. What counts is the right equipment in hand, in sufficient quantity, and on time.

Historians write about the foolishness of negotiating with Adolf Hitler. If Putin wins in Ukraine, future historians likely will write about the ineffective ways the allies dealt with the Ukraine crisis. President John F. Kennedy said to a joint session of Congress on May 25, 1961: “We stand, as we have always stood, for the independence and equality of nations. We stand for a world of peace under law. … And we do not intend to leave an open road to despotism.”

How far will this generation of American and allied leaders go to block the road to despotism?  We’ll see.

James M. Dubik, Ph.D., a retired lieutenant general of the U.S. Army, is a senior fellow at the Institute for the Study of War. He served in military command and operational roles in Bosnia, Haiti and Iraq, and helped train forces in Afghanistan, Japan, South Korea, Thailand, Honduras, and many NATO countries.