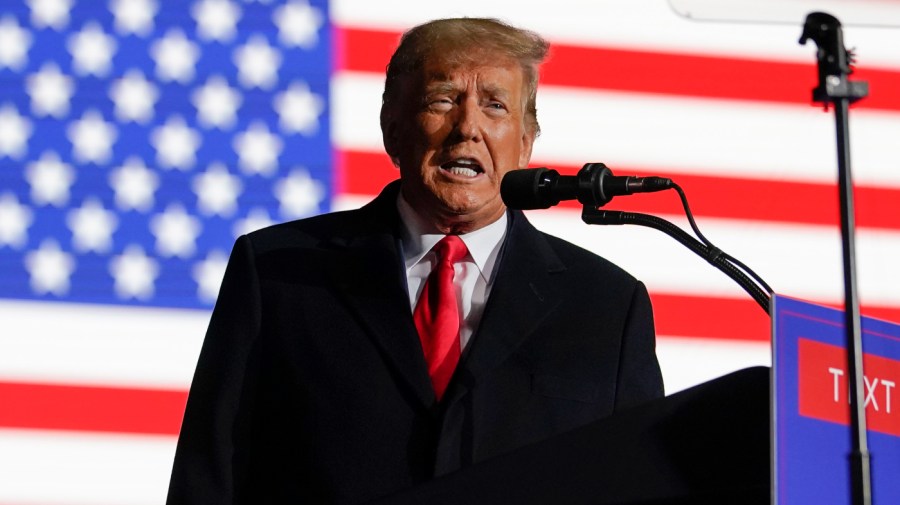 Meta released its long-awaited announcement Wednesday, saying it will in fact let former President Trump back onto Facebook after his two-year ban.

This is Hillicon Valley, detailing all you need to know about tech and cyber news from Capitol Hill to Silicon Valley. Send tips to The Hill’s Rebecca Klar and Ines Kagubare. Subscribe here.

The latest in politics and policy. Direct to your inbox. Sign up for the Hillicon Valley newsletter

Former President Trump’s Facebook and Instagram accounts will be reinstated in the coming weeks, according to the platforms’ parent company Meta, after he was suspended from the social media sites in the wake of the Jan. 6 insurrection.

Meta handed down a two-year ban on Trump’s accounts, a suspension that the company called “unprecedented.” Now it will unlock the accounts in the coming weeks, according to a release from the company on Wednesday.

The decision came amid recommendations from civil society group and Democrats for Meta to keep the ban in place. The critics are likely to sound alarms over the decision to give Trump access to a wide audience on Meta’s platforms once again.

What else to watch: If Trump uses his Facebook account again in the lead up to his 2024 run, the already relatively low userbase on his own alternative social media platform Truth Social may fall.

A bill to ban the video sharing app TikTok from being downloaded on U.S. devices was introduced in Congress Wednesday by Republicans Sen. Josh Hawley (Mo.) and Rep. Ken Buck (Colo.).

The proposal stems from allegations raised by Hawley, Buck and other lawmakers, most of them Republicans, that the Chinese-based video sharing app poses national security risks. TikTok has denied those allegations, especially amid rising tensions with the federal and state governments.

“We hope that [Hawley] will focus his energies on efforts to address those issues holistically, rather than pretending that banning a single service would solve any of the problems he's concerned about or make Americans any safer,” Oberwetter added.

Tesla announced Tuesday that it plans to hire an additional 3,000 workers as part of a plant expansion in Nevada.

The company said in a blog post that it will invest $3.6 billion to grow its plant with the new hires and two new factories, one that will be able to produce enough electric batteries for 1.5 million light duty vehicles annually and another to produce Tesla’s Semi, a fully electric combination truck.

It said the company has invested $6.2 billion in Nevada since 2014 and built a 5.4 million-square-foot “Gigafactory” to produce battery cells, battery packs, drive units and energy modules.

Tesla CEO Elon Musk has said the company could add up to a dozen new factories as part of its goal to increase production to sell 20 million vehicles each year by 2030, the Journal reported.

Twitter has suspended the account of white supremacist and Holocaust denier Nick Fuentes less than 24 hours after his reinstatement on the platform.

Fuentes posted a picture of his suspended account on Telegram on Wednesday morning, with the caption, “Well it was fun while it lasted.”

The 24-year-old leader of the “America First” movement had his account reinstated on Tuesday, after being banned from the platform in July 2021.

In one of his first tweets back, Fuentes posted a short video advertising the 2024 presidential campaign of Ye, the rapper formerly known as Kanye West. The video included an apparent reference to a previous antisemitic tweet from Ye, in which he threatened to go “death con 3 on JEWISH PEOPLE.”

Fuentes’s brief return to the platform was the latest in a series of efforts by Twitter CEO Elon Musk to bring back individuals who had previously been suspended, including former President Trump and Ye.

An op-ed to chew on: How ‘killer robots’ can help us learn from mistakes made in AI policies

Notable links from around the web:

Everyone Wants Your Email Address. Think Twice Before Sharing It. (The New York Times / Brian Chen)

The Rebellion Amazon Can No Longer Ignore (Wired / Morgan Meaker)

Television provider DirecTV has dropped conservative channel Newsmax from its lineup after a dispute over carrier fees, a decision the network is calling an act of political censorship.

DirecTV’s current contract with Newsmax expired on Tuesday evening, after the television provider said it was unwilling to agree to carrier fees proposed by the conservative channel.

“On multiple occasions, we made it clear to Newsmax that we wanted to continue to offer the network, but ultimately Newsmax’s demands for rate increases would have led to significantly higher costs that we would have to pass on to our broad customer base,” DirecTV said in a statement to The Hill this week.

“Anyone, including our customers, can watch the network for free via NewsmaxTV.com, YouTube.com and on multiple streaming platforms like Amazon Fire TV, Roku, and Google Play. We continually evaluate the most relevant programming to provide our customers and expect to fill this available channel with new content.”

That’s it for today, thanks for reading. Check out The Hill’s Technology and Cybersecurity pages for the latest news and coverage. We’ll see you tomorrow.