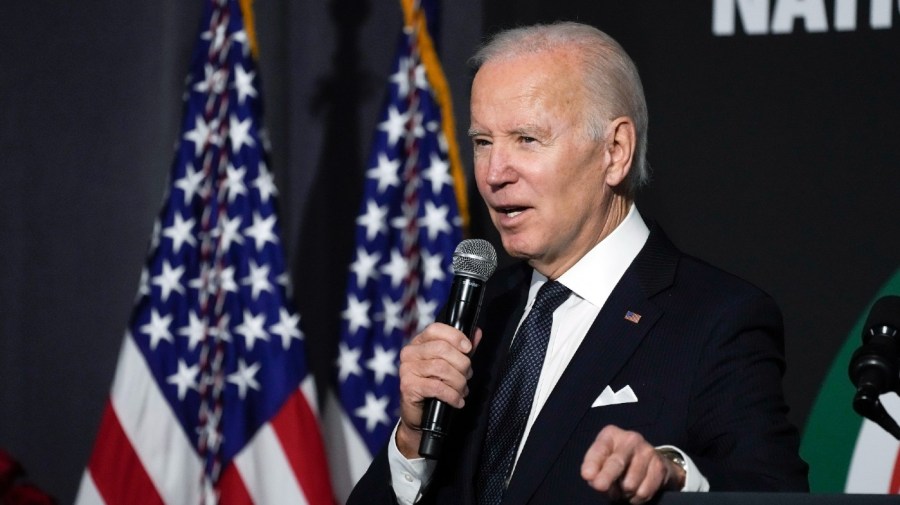 President Biden on Thursday will give what the White House is billing as a “major economic speech,” which he will use to contrast his vision for the economy with House Republican proposals.

BIden will travel to nearby Springfield, Va., for a speech at a steamfitters union hall. He is expected to highlight the economic achievements of his administration thus far, including the bipartisan infrastructure law, a bipartisan bill to invest in semiconductor chip manufacturing and the Inflation Reduction Act, which passed with only Democratic votes last August and funds green technology and caps health care costs.

Biden will argue that Americans will start to see the benefits of those bills in the form of capped costs for prescription drugs for seniors, new construction projects in local communities and new factories, a White House official said.

The president is expected to point to strong economic data, such as low unemployment and hte addition of 11 million jobs since he took office, to argue the country is in a strong position but could falter because of House GOP plans.

“The President has been going on offense defining House [Republicans’] economic proposals in recent weeks as bad for working families in remarks, videos, and hosting Secretary Granholm in the press briefing room,” a White House official said.

The White House official said Biden will point to House Republican proposals to establish a 30 percent national sales tax, something Speaker Kevin McCarthy (R-Calif.) has said he opposes, as well as GOP talk of cutting programs like Social Security and Medicare to curb spending.

Administration officials have also criticized a House GOP bill that would restrict releases from the Strategic Petroleum Reserve (SPR), arguing it would limit the federal government’s contingency options in times of crisis and potentially drive up oil prices.

Biden’s economic speech on Thursday will likely serve as something of a preview of the months to come as he hits the road to pitch voters on his agenda and accomplishments of the past two years in preparation for a likely 2024 campaign announcement.

Republicans, meanwhile, have hit Biden over high gas prices and persistent inflation that has kept the cost of goods high for roughly a year. A recent wave of layoffs in the technology industry and at other businesses have also put a dent in the administration’s argument that the economy is on a stable upward trajectory.