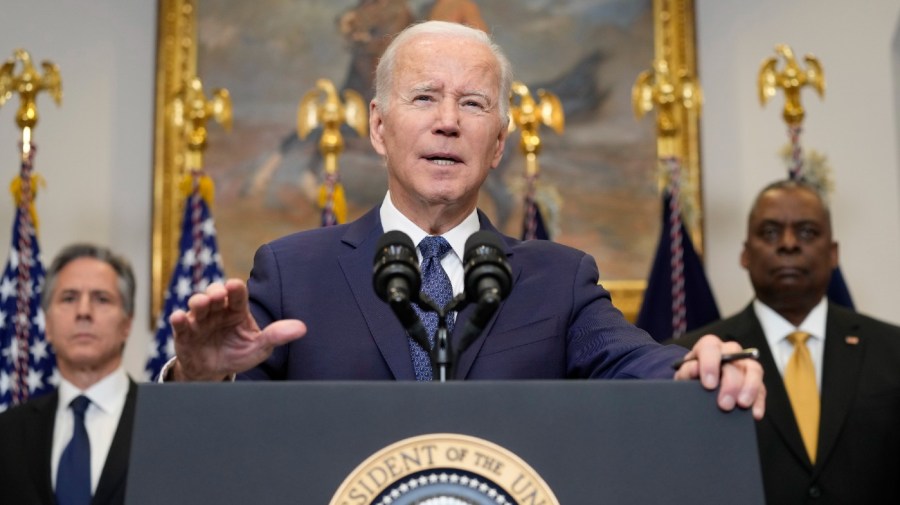 President Biden on Wednesday said that the commitment of American Abrams tanks to Ukraine is not “an offensive threat to Russia,” appearing to respond to threats from Russian officials that the provision of Western tanks to Ukraine would escalate tensions with Moscow.

“There's no offensive threat to Russia” the president said in remarks from the Roosevelt Room of the White House.

“If Russian troops returned to Russia ... that's where they belong, this war would be over today. That's what we all want, an end to this war,” the president said.

The president made his remarks while announcing the U.S. would provide 31 M1 Abrams tanks for Ukraine in coordination with similar supplies from NATO allies including Germany, the United Kingdom and others.

The president dismissed the notion that his decision to provide Abrams tanks for Ukraine came as a result of German pressure for the U.S. to share the burden of a move that has already drawn a bellicose reaction from Russia.

“Germany didn't force me to change my mind; we wanted to make sure we're all together,” the president said in response to a reporter's question. “That's what we're going to do all along — that's what we're doing right now.”

The speaker of the lower house of Russia's parliament, Vyacheslav Volodin, warned Sunday that Ukraine's allies supplying tanks "would lead to a global catastrophe."

And the Russian Embassy in Berlin responded to news of Germany agreeing to supply its Leopard 2 heavy tanks, saying the move is "extremely dangerous" and "takes the conflict to a new level of confrontation".

The Abrams are not expected to reach the Ukrainian battlefield for months. Biden said that U.S. Secretary of Defense Lloyd Austin, who stood behind him during his remarks, recommended the Abrams be provided “because it will enhance Ukraine's capacity to defend its territory to achieve its strategic objectives.”

“With spring approaching, Ukrainian forces are working to defend the territory they hold and preparing for additional counteroffenses,” Biden said.

“To liberate their land, they need to be able to counter Russia's evolving tactics and strategy on the battlefield in the very near term,“ the president added. “They need to improve their ability to maneuver in open terrain, and they need an enduring capability to deter and defend against Russian aggression over the long term.”