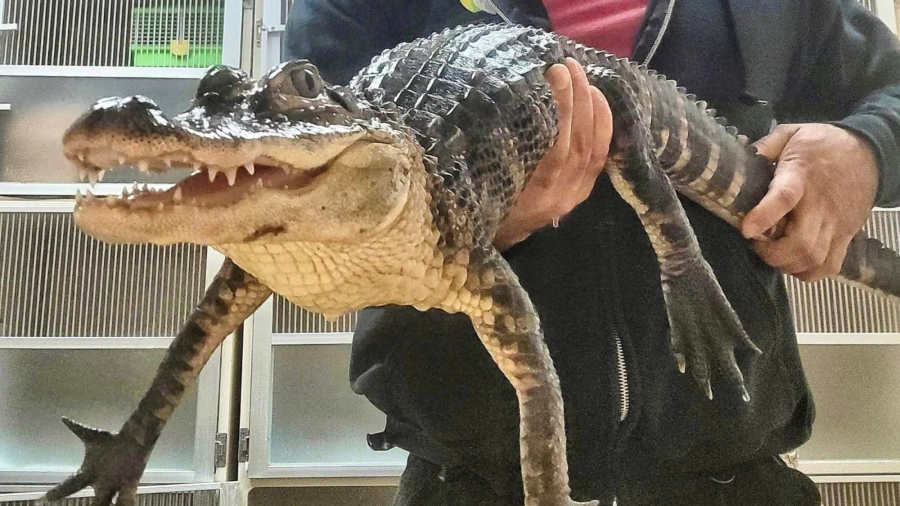 TAMPA, Fla. (WFLA) -- A young alligator found abandoned inside a plastic storage bin in a New Jersey parking lot has found a new home in Florida.

The alligator was found late at night in Neptune Township, New Jersey on Jan. 15, when a teenager reported seeing a storage bin in the middle of a parking lot. Police later discovered the boy staged the abandonment alongside the owner of the alligator.

Police said the owner originally purchased the animal at a reptile expo in Pennsylvania. The teen concocted a scheme to abandon the gator after his “parents refused to allow him to keep the 3-foot-long reptile,” the Monmouth County Society for the Prevention of Cruelty to Animals wrote on Facebook. He reportedly called the police pretending to be a good Samaritan.

The owner faces charges from the New Jersey Department of Fish & Wildlife for keeping a prohibited and dangerous exotic species as a pet. The teen, along with his parents, face charges of falsifying a police report, according to the SPCA.

The SPCA transferred the alligator to the Cape May County Park & Zoo, where it will be cared for until Kevin Wilson, the supervising animal keeper for the reptile department, can transport it to Tampa, Florida.

Wilson said people frequently call the zoo wanting to donate their pet reptiles. Some can be rehomed locally, but that's not the case for alligators.

"Alligators are illegal to keep as pets here in New Jersey, with most being euthanized if they were confiscated by law enforcement," Wilson said in an email to WFLA.com. "I didn’t believe killing them was right, so I looked for options."

Over 15 years ago, multiple reptile experts suggested that Wilson reach out to Croc Encounters, a Tampa-based sanctuary and animal education facility that often travels to the northeast to collect unwanted crocodilians. The zoo has been sending alligators to Tampa ever since.

"We keep them in quarantine away from the zoo collection and I transport them each year to Croc Encounters on my own time," Wilson said.

Croc Encounters staff said the facility has taken in hundreds of animals over the last 18 years. Some smaller alligators are loaned to zoos before returning to the sanctuary to live out their days.

"Our mission at Croc Encounters is to be a haven for unwanted reptiles and to be an educational facility," Karina Sura Paner, with Croc Encounters, told WFLA.com.

Wilson said he's thankful for the zoo's 15-year partnership with the sanctuary, which has given dozens of animals a new lease on life after escaping the illegal pet trade.

"Over the years, more than 75 alligators have been given a second chance that may not have happened if not for Croc Encounters," Wilson said.

He said It could be a while before the rescued alligator finds its way to Florida since they are still coordinating transportation.